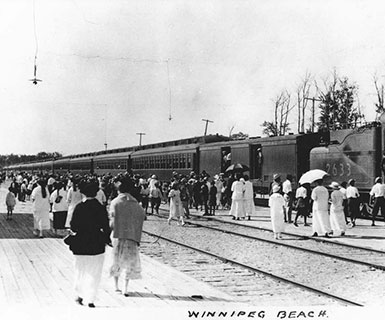 Manitoba's cottage communities were built by the railroads. In 1901, Sir William Whyte of the Canadian Pacific Railroad purchased 330 acres on the west shore for $3,000. In June 1903, the first Winnipeg Beach train brought up vacationers to their new summer paradise. By 1912, 10 trains took 40,000 vacationers to the beach each weekend.

For beach fanciers like Val Werier, the easy access made it possible to take a vacation on a shoestring budget. "A couple of friends and I when we were 15 decided we were going to go on a vacation to the lake, said Werier. "The lake meant Winnipeg Beach. So what did we do? We had no money. We got a bell tent and all our belongings and groceries, went on a streetcar went to the CPR station, got on a CPR train and went to Winnipeg Beach.

There we camped on a field opposite the station." According to cottager Frances Russell, the train was a very big factor in the early development of the beach community. "In fact," she said, "the rhythm of beach communities circulated or revolved around the train.

There was a 7:20 train that used to take the daddies into work and the same train would come back out, it was called the 5:20. It would arrive on the beaches on the West Side around 7:00 at night, just in time for them to have a swim and a drink before dinner. Then there was the other train known as the moonlight special. There was a moonlight special on both sides of the lake Saturday with a train that left Winnipeg about 6:00 at night. It was for the partygoers, the people that would come up to use the big dance pavilions at both Winnipeg Beach and Grand Beach. It would leave at midnight. It would blow its whistle at 11:45 to tell everybody to get to the train station because if you missed it you were on the beach until the next morning because there was no other train coming back out."

Werier also has fond memories of the Moonlight Special. "You'd go there about 6:30 come back at 12 and they packed them in. You'd go to the dance there and at that time it was really an attractive place. They had a fine ballroom. It was considered one of the best in western Canada . Good hardwood floors. You paid your nickel and you had your dance… And people stood around a balustrade and railing around the dance floor to watch who was on the dance floor and who was dancing with who and what songs were being played."

The train was a part of the romantic era of the beaches. But the advance of the automobile made the railroads obsolete. "As the auto advanced, the train retreated," Russell. "The very last trains to go virtually were the moonlight specials. Then at the same time, the dance hall craze, that faded too. And the dance pavilions, the one at Winnipeg Beach was made into a roller rink, the one at Grand Beach just burned down. It was never rebuilt."